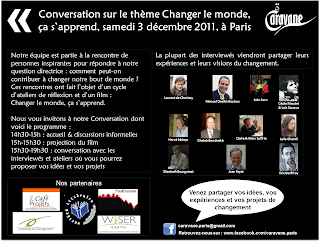 THE WORLDSHIFT 20 DECLARATION Issued by the Worldshift 20 Council on the 5th of November, 2011

THE WORLDSHIFT 20 DECLARATION Issued by the Worldshift 20 Council on the 5th of November, 2011
PREAMBLE
Recent Declarations issuing from the annual Summits of the G20 read like emergency reports of Ministers of Trade and Finance rather than the deliberations on the wellbeing of the people of the world by the heads of government of the world’s twenty politically and financially powerful nations.
The final communiqué of the 2011 meeting of the G20 in Cannes repeats this pattern. The G20 headlines its Declaration with the statement that its concern is with our common future, and its aim is to undertake renewed collective action for the benefit of all. The Declaration notes that global recovery has weakened leaving unemployment at unacceptable levels, and it identifies as the reason for this weakening tensions in financial markets, vulnerabilities in emerging markets, increased commodity prices, and exchange rate volatility. It responds by reaffirming its commitment to reinvigorate economic growth, create jobs, ensure financial stability, promote social inclusion and make globalization serve the needs of the people. Environmental protection, green energy, sustainable development and climate change are given brief mention toward the end.
The G20’s assessment of the world’s problems is one-sided, and its proposed remedies are short-term and ultimately ineffective. The twenty heads of richest states perceive the world as an economic system and assess its imbalances in economic terms. They do not recognize that the world today is deeply fragmented, full of mistrust and antagonisms, with growing gaps between rich and poor, and Western-style monetized societies and traditional cultures living by alternative values. They have no awareness of the deepening disconnect between human life, especially in big cities, and the rhythms and balances of the Earth’s life-sustaining ecosystems.
The human system is more than an economic and financial system, and reestablishing its balance calls for more than economic and financial measures: it calls for the fundamental transformation of the world’s economic political, and social systems. Measures that fall short of this objective are not more than fixes that introduce some measure of stability in the short term but lead to recurring and progressively worsening instability in the long. The requirement is for an embracing view of the problems of the world, and a global and humanistic set of recommendations for coping with them.
The WorldShift 20 Council offers its alternative to the G20 Declaration in order to call attention to shortcomings in the philosophy of the G20 and introduce a more appropriate holistic and humanistic perspective.